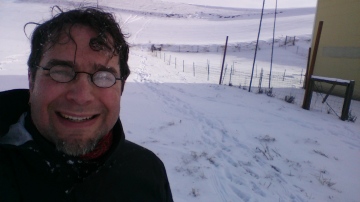 Hey there! My name is Dan Haug, and this website is a creative outlet for me. Over time, it will become populated (passive voice) with blog posts, videos, pictures, and music.

I’m married to a woman I met at the age of fourteen and we have four kids, all of whom have been (or are being) homeschooled.  I’m a geographer by training, and, although I spent most of the last ten years managing an IT Department for a local government, I remain obsessed with the way in which the artifacts of natural and human processes are distributed across the landscape.

As this website may indicate, I also love singing (and I play the guitar so that the singing is more fun).  I’m a huge soccer (futbol) fan.  I coach and play, and I’m a big fan of the Los Angeles Galaxy (in Major League Soccer) and the United States Men’s National Team (USMNT).

I’ve been publishing videos on YouTube for nearly four years now, and had a channel called NothinToSee for most of that time (although I’m using DanHaugMusic now).  I really enjoy making videos, but also learning about the YouTube community.  I’m a particular fan of the Vlog Brothers (John and Hank Green) and Nerdfighteria (you may notice that they make appearances in a number of my songs).

There are two cats that live in my house regardless of my stated desires.